My name is Ben DeMeyer (which hopefully you’ve guessed by now), and I’m a software developer. Or a software engineer. Or a web developer. Or just a programmer. The terminology can vary widely depending on who you’re talking to, but the gist of it is this: I write code that makes computers do the things that I want them to do. Over time, my goals have evolved from simply finding a way to get the job done to finding a way to get the job done in such a way that when I come back and look at it again two months later, I’ll still have some semblance of an idea of what’s going on. If you’re not familiar with programming yourself, this might not sound like a particularly difficult task. It is.

What I do well, really well in fact, is code. As a programmer, my languages of strength are Python, JavaScript, PHP, and C#. As a client-side developer I am an expert with HTML and CSS, and thanks to SharePoint’s DataView Webparts I’m pretty good with XML, XSLT, and XPath as well. And on the data side I’ve worked extensively with a variety of relational databases, primarily with MySQL, PostgreSQL, and Microsoft’s SQL Server.

But enough about what I do, you can read all about that in my blog, this page is About Me, so let me tell you a little about myself.

I grew up in Brighton, Michigan where I attended Brighton High School and was very active in extracurricular activities, mostly surrounding theatre and drama. When I was a Sophomore, I started experimenting with programming on my TI-83+ graphing calculator. If my life was made into a movie, that moment would probably mark a turning point as light dawned and my future spread out before me. Unfortunately real life is not that simple and I didn’t make the connection between programming and a possible future career until much later.

What I did decide to do with my life was become a broadcast journalist. This seemed like a great idea at the time, I swear. With this plan firmly implanted in my mind, I attended the University of Missouri, one of the top schools for broadcast journalism in the world, to pursue my dream. It took all of three years for me to realize that I absolutely hated broadcast journalism, at which point I switched my major to the subject I was closest to finishing a degree in: Political Science.

College wasn’t a total loss of course, I did meet a wonderful lady who would eventually become my wife. Struck with love, shortly after I graduated I followed my lady to her hometown of St. Louis, where we spent three fantastic years. After that we spent two years to Ann Arbor where she earned her Master’s degree from the University of Michigan. Once she graduated we quickly gave in to our yearning for city life and moved to Chicago, where we’re currently enjoying commuting via public transit and meeting up with our friends to try out new restaurants every Wednesday.

Here's a picture of me with the World Series trophy: 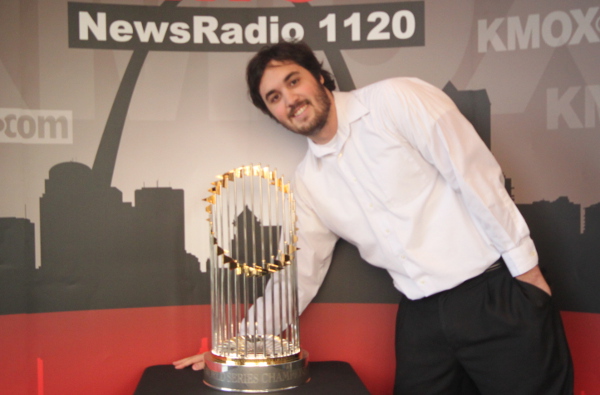